Lake Julian Festival of Lights will once again brighten local holidays as it enters its eighteenth year of operation. The annual light show has become a local winter holiday staple offering an inexpensive and accessible family-oriented experience. Lake Julian Festival of Lights thrives from its connection to the community; 20% of proceeds are donated to Buncombe County Special Olympics, while the remaining income is reinvested to enhance the festival for the following year.

The light show will open with the popular Lights by the Lake Foot Tour on December 1, from 5:30pm – 9pm. Admission for the walking tour is only $5 per adult. Children under 16 are admitted free with a paying adult. Guests are invited to experience the lights through a memorable and immersive experience by leaving their cars behind and taking a leisurely stroll through thousands of bright, twinkling holiday lights. Visitors can wind their way to the center of the park where they will find games, crafts with LEAF’s Easel Rider Artists, s’mores, are more. Santa will even be on hand for photos. Parking for the foot tour will be at Family of Faith Fellowship Church.

Lake Julian Festival of Lights will open to cars on December 2 and run through December 23, operating nightly from 6pm – 9pm for a thrilling visual experience. The drive circling the park becomes a magical journey through tunnels of dazzling, animated, and stationary light displays. Visitors are invited to watch lights twinkle over the lake while listening to their favorite holiday music as the sounds transform the show into a magical holiday journey. The festival’s official radio sponsor has multiple holiday stations available to stream from the free iHeartRadio app.

Lake Julian Park is located at 406 Overlook Extension in Arden, just off of Long Shoals Road.

An opening ceremony at Bojangles’ Coliseum included the Law Enforcement Torch Run, lighting of a cauldron, and a parade of athletes, similar to the modern Olympic Games. With more than 1,000 athletes from across the state, it was the second largest state-level competition of the year. Sports included six disciplines: basketball, bocce, golf, roller skating, soccer, and tennis.

“The Fall Tournament was a great platform for our athletes to show off how hard they have worked this season,” said Karla Furnari of Buncombe County Recreation Services, who is also a Buncombe County Special Olympics coach and Local Coordinator. “The Special Olympics athlete’s oath is, ‘Let me win. But if I cannot win, let me be brave in the attempt.’ Our primary goal is to build confidence, have fun, and share the experience and friendship with families, supporters, and volunteers. In addition to the competitions, ceremonies, and awards, there was also a dance held on Saturday night that the athletes loved.”

Buncombe County Special Olympics is made possible through funding from donors and support from Buncombe County Government. Festival of Lights, held December 1-23 at Lake Julian Park, is the organization’s largest fundraiser of the year. To donate or volunteer, visit buncombecountyspecialolympics.org. 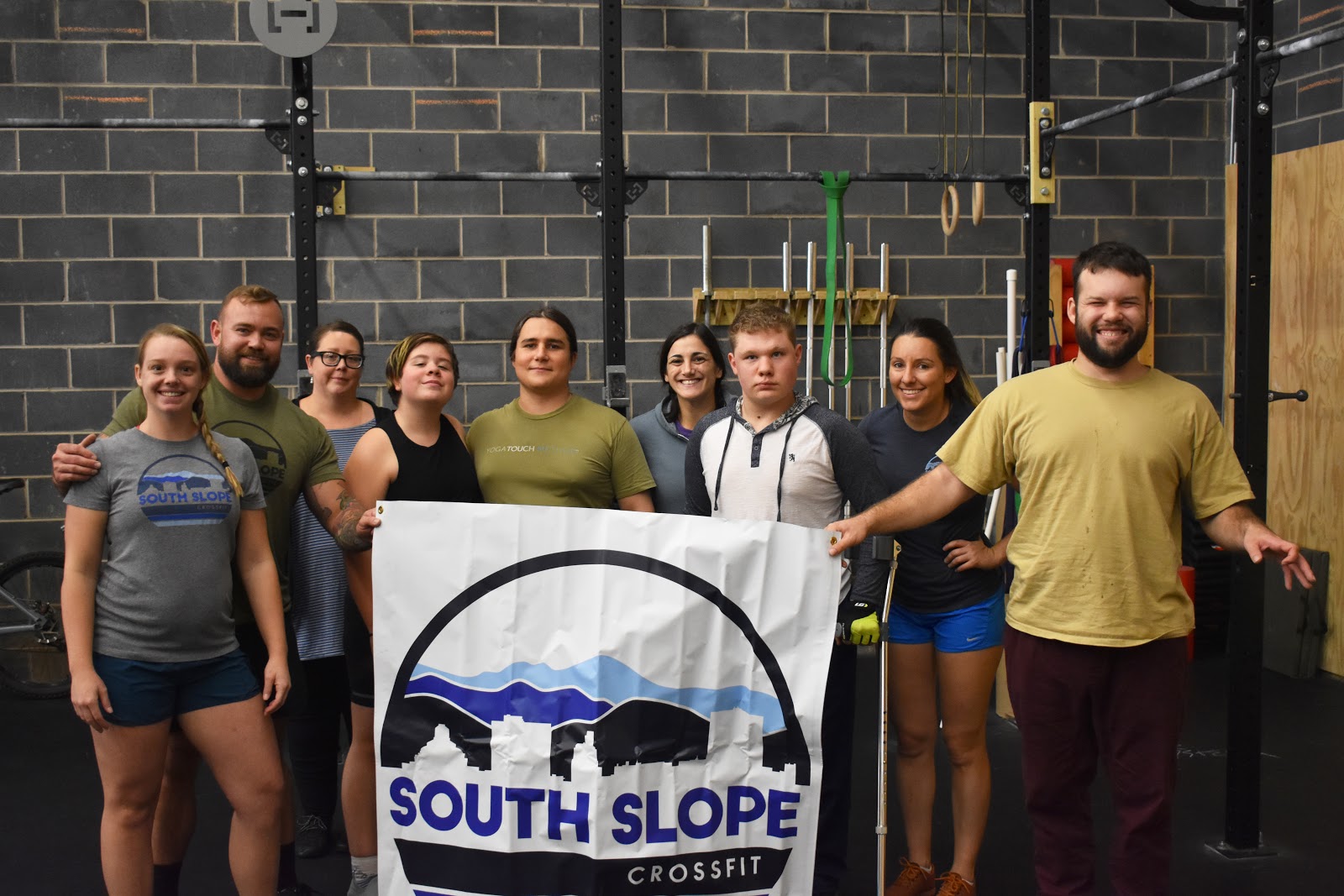 Buncombe County Recreation Services, Special Olympics of Buncombe County, and South Slope CrossFit today announced a partnership to offer free programs each Wednesday at 3:00 p.m. for individuals with intellectual and developmental disabilities. Classes are open to the public and participants do not need to be Special Olympics athletes. The Adaptive Athlete Program features inclusionary workouts tailored to develop strength, mobility, and body awareness through functional movement.

“CrossFit, interval training, and fitness in general has seen huge jumps in participation over the past several years,” said Karla Furnari of Buncombe County Recreation Services. “We want to ensure every member of our community has an open door to a supportive and safe training environment to help them thrive the best they can. There should be no barrier to entry for exercise and wellness.”

Coaches have participated in hands-on courses to learn inclusive techniques for athletes with intellectual and developmental disabilities, including specific strategies for adapting individual movements and entire workouts. Each workout includes a warm-up and cool down with about 40 minutes of a great total body workout – all alongside members of a like-minded community. “Our Adaptive CrossFit program is designed to improve the functional capacity of our athletes inside and outside of the gym regardless of skill level, ability, or adaptation. We are thrilled to be able to provide this course in a fun, safe, and supportive environment to adapt athletes across the county, ” said Julie Hansell, South Slope CrossFit’s Head Adaptive Coach.

“Our ultimate goal is to prepare athletes for everyday life,” said Furnari, who is also a Special Olympics coach. “What we practice in class – squatting, picking things up, pulling things close – are designed to help foster independence in a safe space. When you’re dealing with a limitation, it’s easy for others to write off that you can’t do hard things. Training in a room of people with similar challenges helps everyone understand their potential.”

“It is our belief that every single person is an athlete, whether they realize it or not. It is our mission to help every person who walks through our door tap into their athletic potential, no matter who they are or what their perceived limitations might be. With these values in mind, we started the Adaptive Program in order to provide an environment with highly trained staff where people with various disabilities can grow and develop in ways they might not have thought was possible,” Says South Slope CrossFit Co-Owner, Scott Mirkin.

Workouts take place at South Slope CrossFit located at 217 Coxe Ave in downtown Asheville each Wednesday from 3:00-4:00 p.m. starting October 17. Reservations are not required, but those who are interested are encouraged to RSVP on Facebook.

Some of our teams have been training and preparing for Summer Games all year. It is almost their time to shine (but we know they shine all the time). Please join us in cheering loudly for our bowling team, cheerleading team, gymnastics team, and our swimming team. If you see them around town then give them a big high five and let them know how great they are going to do. You might even want to do a little dance with them. We do have a donations page setup for our teams (BCSO Store). Please donate if you can to help them travel to states. We can’t run this program without the help of our amazing coaches, volunteers, parents, and this amazing community we are part of!

Today’s athlete spotlight focuses on Danny Bourne. Danny doesn’t just play Soccer for Buncombe County Special Olympics, but he takes his roll as an athlete and supporter much further. Danny made reindeer out of tree bark this year to sell in order to raise money for our local program. Danny was able to sell all his reindeer and raised over $200 for the local program. It is dedication like his that help this program succeed.

We asked him a few questions about Special Olympics and here are his answers.

What is your favorite sport or activity with Special Olympics?

Is there a new sport or activity you would like to learn?

Hanging out with my friends.

What do you do outside of Special Olympics?

What is one word that describes you?

Is there anything you want people to know about Special Olympics?

Great place to hang out.

Danny is pictured above with his reindeer on the right. The left picture is of a local bank (First Bank) who bought some of his reindeer and decorated their tree at work with them.

Thank you Danny for your continued support and enthusiastic attitude towards the other athletes and coaches.

Throughout the month of August local coffee shops donated a penny per cup of coffee sold to our  program. This campaign not only raised money for Buncombe County Special Olympics, but it helped bring awareness to our athletes and the amount of effort and dedication our athletes show everyday. It is important to them to know they have an entire community behind them.

We asked the community to take pictures at their local participating coffee shops and post a picture with the hashtag #coffee4champs. We randomly drew a name of all the people who submitted pictures and our winner of the Disney Tickets is Hannah Moore. She is excited to attend Disney for the very first time!

Congratulations Hannah! We hope you have a blast! Thank you to everyone who supported Buncombe County Special Olympics just by drinking coffee! Check in during summer 2017 for our next Coffee4Champions campaign.

The Young Athletes Program (YAP) is an inclusive program for children ages 2-7 with or without intellectual disabilities. The focus is on fun activities that are important to mental and physical growth. Activities will aid in the development of social and motor skills for children within this age range. This program also helps in bridging the gap between children with and without intellectual disabilities by integrating them at a young age and teaching acceptance for all.

The YAP curriculum provides an outlet for physical activity and socialization in a format that engages strengths, differences, inclusion, and collective accomplishment. Unlike many similar programs, YAP is offered free of charge to all participants.

Fall 2016 YAP will be held on Wednesday evenings from 6:15pm – 7:15pm starting on October 26th. The will be held at the Jewish Community Center located at 236 Charlotte Street, Asheville 28801. The room will be held in the gym on the second floor and there is an elevator available for use.